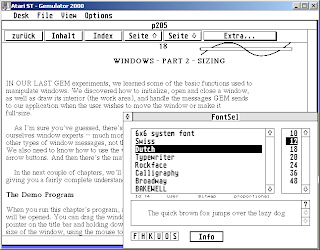 In the Atari scene these days you will find documentation for Atari software in .hyp format. The traditional program used to view these is ST Guide. I found a german demo of the program called 'stguide.zip' which contained:
ST-GUIDE.APP
ST-GUIDE.HYP
ST-GUIDE.INF
ST-GUIDE.REF
I might claim I got it from here but I can't be sure.
Update 21-July-2009 There is another version of this downloadable from 16/32 systems on the downloads page. direct download

Installation:
Just unzip the files and possibly make a copy of ST-GUIDE.APP, renaming it as ST-GUIDE.ACC and put it in the root folder.
It also would be possible to associate files with the extension .HYP with ST-GUIDE.APP in your favourite desktop. (Tos 2.06 upwards makes this easy)

I also found a file called stgde101.zoo (zoo.ttp -extract stgde101.zip) which has nothing to do with ST Guide but is:
'TAG - The Atari Guide' by Keith R. Marshall and is part of the 'galactic guide' project. Its file viewer is called STGuide. (Its probably more than just a file viewer...)

The next option I've seen recommended is HYPView, available from here. They have screenshots and I tried out version 0.40.0
And so I tried it out, and in 640x480x16 colours, it started and didn't seem too terrible, in that I got as far as selecting a .hyp file to view, but it didn't
actually display anything.
So then I tried putting the hyp files into C:/gemsys/guides/
and that didn't make much difference. I also note that when I exited the program the keyboard stopped working. So that sounds like a bad crash.
If anyone has better success with this program I'd love to hear from you :-)

The other alternative for Windows users is to use winguide:
http://frankrueger.dnsalias.net/old_homepage/#winguide

This worked well for me and only the menus are in german. There appears to be an option to save your .hyp file as a .html file. I tried it and it works. You end up with lots of .html files (one per page) and a few additional images too. Unfortunately I started this post with the aim of getting gdos working too, and we've gone sideways.

Back in the original ST-Guide, it expects you to have installed a 'font selector' to let you change the screen font used to display stuff. This might be useful so you can look at a helpfile while also looking at your code/work/whatever if you could only choose a smaller font.

In theory you will want a working selection of fonts already installed, however I'm going the simple solution first because gdos (and alternatives) may be a bit tricky.
So I found the file fontsel.zip, this contained:
FONTSEL.HYP - german .hyp file
FONTSEL.PRG
FONTSEL.REF
FONTSEL.TXT - german documentation
FONTSEL.ENG - english translation of the documentation
INSTALL.ENG - english installation instructions for the impatient

Basically, the simple way to install it is to put FONTSEL.PRG into the auto folder and reboot. Then in STGUIDE, you can select from a range of built in 'SYSTEM' fonts. They are very dull monospaced ones, but have the advantage of being quick to display.
Also of note in the german documentation is a list of other font selectors, which I'll copy and paste for your reference here (thanks to winguide):

Unfortunately the links didn't go anywhere, so it's a case of typing in the names of the authors and seeing what comes up in google.

Installing GDOS or.. getting a nicer looking font system to work.

On the one hand, there is plenty of information about GDOS.. On the other hand, who wants to use the original GDOS that needs lots of manual editing of assign.sys files, and then trying to guess which resolution you're in. And all that for bitmapped (non-scalable) fonts. There must be an easier way..

Here is an example assign.sys to remind you of how horrible it all is:
example.txt

So I'll be needing some fonts named in the style XXYYNN.FNT where NN is the font size in points, while YY is the 'name' of the font eg; Times Roman might be TR...

I'll also be needing something like gdos.prg for the auto folder, and screen.sys? possibly as a 'screen' driver. Not sure about that one, I know you do need one for any printers you have.

A Shortcut..
I cheated and went straight for fontgdos, from "Atari Explorer Online Volume 1 Issue 03" which contained two accessories: FONTGDOS.ACC and FSM.ACC (I put both of these in the root of C:) and also FONTGDOS.PRG which I put in the C:/AUTO/ folder. One of these desk accessories lets you choose the folder for your fonts and select which fonts are associated with which screen resolution or printer (ie; you don't want printer fonts to be in your screen section of assign.sys, otherwise you might get a size 13 printer font - which would look huge on screen and then a 14 point screen font which then looks tiny -- worse still FONTGDOS may just crash, because it can.)

For whatever reason gemulator was being difficult and assign.sys would not save no matter what I did. Eventually I figured out how to disable drive A: and changed the boot device to C: and then everything went a bit smoother.

Finally the next stage was finding some real fonts.. I found the file gdsfonts.zoo and that had a few fonts to choose from. I installed almost all the ones with HI at the end of the names. And then it liked to stop working entirely, gdos wouldn't show any of the fonts I'd chosen. I opened up the ASSIGN.SYS file and got rid of the font starting with a number. Then everything was fine and I was able to view STGuide files with a different font to the system one. (see the screenshot)

This post has been a little longer than I expected, but the point is that once you've got the hang of getting a couple of fonts installed, you can probably consider using some of the more graphical atari programs that like scalable fonts, AtariWorks is one I'll be trying out, if I can find it.. Also I might see if I can find my old copy of fonty, a realtime font generator..

Some reference information:
For a really interesting and way too in-depth article about GDOS (and the various ones you could use to use true-type fonts and therefore save yourself from only having 4 fonts available in 4 different sizes!) and also get real printer drivers (possibly-- not sure if there's a useful 'image' driver or 'pdf' driver), have a look at
this and read about Speedo GDOS (v 5 upwards) and NVDI 3.0 and above. Both of these programs offer to let you use true type fonts (ie; the ones that come with windows ;-) and let you scale them to any old size, so of course this would be useful if you were for example trying to view web pages from the internet)
I haven't been able to try either and I think it might be a bit difficult to get hold of this commercial software.. As I previously mentioned.. if you wanted to use Papyrus or Atari Works, you'd benefit immensely.

In addition this site 16/32 Systems has other interesting software. (16/32 Systems, 156 Maidstone Road, Chatham, Kent ME4 6EN). The site was last updated at the end of may this year, so I think prices and products are up-to date. He writes: